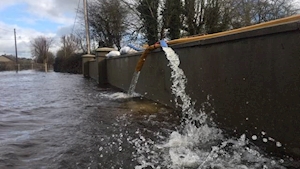 The Flood Relief Minister, Kevin ‘Boxer’ Moran, has said water is still being pumped away from several homes after the recent flooding crisis.

The rain has eased since the weekend and the water levels have receded in many places.

However, efforts are still ongoing to stop houses from being flooded in several areas in the Midlands and west.

Minister of State, Kevin ‘Boxer’ Moran, said Athlone, west Clare and Carrick-on-Shannon in Co Leitrim are among the worst hit.

He said: “People up and down the length and breadth of the country are still pumping water from their homes, the local authority in Athlone have massive big pumps in a number of locations.

“In some places there are two big pumps keeping houses dry, but in saying that, there are people in those areas with petrol pumps going as well.”