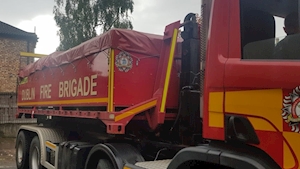 Dublin Firefighters have extinguished a fire in an underground car park in Ballymun.

The blaze off St Margaret’s Road is now under control with fire services said to working to with the ESB and Gas Network at the scene.

Dublin Fire Brigade said three cars were found burning there this afternoon and three fire engines from Finglas and Phibsborough were sent to tend to the incident.

3 fire engines from Finglas & Phibsborough fire stations are dealing with cars alight in an underground car park off St Margaret’s Road. The fire is under control and we’re working with @ESBNetworks @GasNetIrl on scene #Dublin #fire pic.twitter.com/gfBkWYZadg

Wales innomin - September 20, 2020
0
A new hotel by Swansea's indoor arena is likely to be eight storeys, but has been shifted after concerns from...

The Kymin in Penarth could be sold off and turned into a restaurant or...

Wales innomin - September 20, 2020
0
The Kymin in Penarth, a popular wedding venue and erstwhile community centre, could be sold off and turned into a restaurant...

UK News innomin - September 20, 2020
0
Leicester continued their vibrant start to the season by ruthlessly exposing the limits with which Sean Dyche have to cope at Burnley. While...

New hotel in Swansea city centre is likely to be eight...

The Kymin in Penarth could be sold off and turned into...