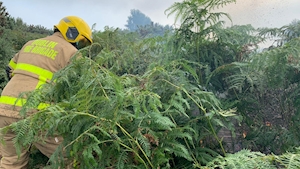 Three crews from Dublin Fire Brigade are tackling a wildfire in Killiney in Dublin.

Footage on social media shows a large cloud of smoke rising over the hill.

Locals have been advised to avoid the area and keep windows or doors closed.

Three crews of Firefighters are fighting a wildfire in #Killiney.

If you are living in the area, close your windows and doors while we extinguish the fire. pic.twitter.com/wbBOukYcPc

This comes after Dublin Fire Brigade were called to Killiney Golf Course to extinguish a wildfire there yesterday.

Firefighters from Dun Laoghaire have extinguished a wild fire on Killiney Golf Course.

An early 999/112 call gives our Firefighters the best opportunity to stop the spread of a wildfire.

Call us if you see a wildfire, don’t assume someone else has called. pic.twitter.com/eIYHBi84LA

Sack of Balbriggan was defining episode in War of Independence, says President

The village with one way in and one way out but only half the...

The village with one way in and one way out but...