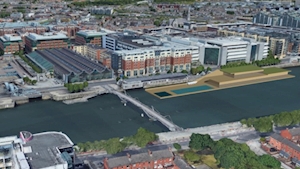 A proposed €15 million heated sea pool on Dublin’s river Liffey has been described as “unnecessary” and as a pool for “bankers and tourists” by local councillors.

The plans from Dublin City Council also include sauna, yoga and cafe facilities, located beside the Sean O’Casey bridge and near the planned white water rafting centre.

The council said this would develop Custom House Quay into a hub for water-based recreational activity.

The plans will be formally presented to Dublin councillors next week for their views.

Local councillor Christy Burke said the money would be better spent on housing and childcare.

“There are many other activities that can be put to use [in the area] without spending €15 million,” Mr Burke said.

“I welcome extra investment for recreational facilities. But €15 million for a novelty swimming pool in the River Liffey is a non-runner. Especially when communities across Dublin are crying out for basic sports and recreation facilities,” she said.

“It is a good use of dockland maritime heritage, it will create activity, light and vibrancy in the area outside business hours and weekends,” he said.

“And it will also create jobs and accessible jobs for local people.”

“I think it’s a very good idea. I think we need big ideas for the city, we need to animate more use of the water and we need to provide more recreational facilities,” Mr Lacey said.