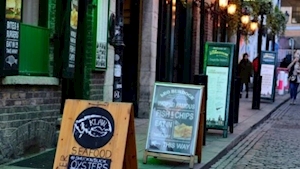 Out of nine applications, only one permit has been granted, allowing businesses to place advertising signs on the street outside.

CEO of the Restaurants Association of Ireland, Adrian Cummins, said it is draconian and anti-business.

Mr Cummins said: “During the recession, we we re being encouraged to advertise special offers to tourists, making the city enticing for tourism, but nine years on here is Dublin City Council.

He added that some companies have reported a drop in the number of customers since the new rules were introduced.

Mr Cummins said: “They’ve hired in inspectors and auditors to look at this by Dublin city council, the taxpayers is paying for this.

“So if there is only a small take-up, are they going to make those people redundant? Are we going to foot the bill again by the taxpayers, by the commercial rate-payers again in the city for a regime that doesn’t seem to be working?”