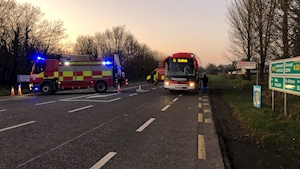 There have been two serious road traffic collisions in Munster over the last 36 hours, including one fatality.

This afternoon gardaí attended the scene of a crash in Co Cork.

Following the incident, a woman was airlifted to Cork University Hospital.

“Gardaí and Emergency services are currently at the scene of a road traffic collision at Quatertown, Mallow, Co Cork,” a garda spokesperson said, adding that the incident occurred about a mile outside the town.

“Traffic diversions are in place.”

Meanwhile, a man who was died instantly when his van collided with the back of an articulated truck outside Limerick city, Saturday has been named locally.

Ivan Harvey from Crecora, Co Limerick was driving a 2011-registered silver VW Transporter van that collided with a 131-registered truck shortly before 1.30am, on a slip road, off the M7 Limerick to Dublin motorway.

Gardai said their “initial enquiries” were “that the lorry was stationary at the time of the collision”.

Iti s believed he was waiting in the truck for assistance when the collision occurred.

The driver of the truck, a Lithuanian man, was not physically injured, but he was said to have been badly shaken by the incident.

Gardaí are investigating the circumstances of the collision, and have appealed for witnesses.

A spokesman said: “Gardaí at Roxboro Road are appealing for witnesses following a fatal road traffic collision in Co. Limerick. Shortly after 1.30am Gardaí and emergency services were called to the scene of a collision involving a van and an articulated lorry on the M7 motorway (westbound).”

“The driver of the van, a man in his 40s, was pronounced dead at the scene a short time later. His body has since been removed to the mortuary at University Hospital Limerick. A report will be prepared for the local Coroner.”

“The lorry driver was uninjured. It’s understood from initial enquiries that the lorry was stationary at the time of the collision. Garda forensic collision investigators will complete and examination of the scene at day break.”

‘I stopped cooking for three years after a crash nearly killed me and my...

Wales innomin - August 8, 2020
0
Lee Skeet never really had a plan in life apart from planning his next trip to a far-flung corner of the...

UK is ‘heading back into lockdown next month’, says former government chief scientist

Wales innomin - August 8, 2020
0
The UK could be heading for full lockdown again by the end of the month, according to former government chief scientific...

‘I stopped cooking for three years after a crash nearly killed...

UK is ‘heading back into lockdown next month’, says former government...