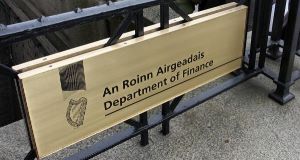 The Department of Finance can “no longer hide behind” data protection rules to refuse to reveal how much it paid barristers to work on the €14bn Apple appeal, the Public Accounts Committee has said.

The department has come in for persistent criticism for using the excuse of the introduction of GDPR in 2018 as a reason to not release payments to barristers or former senior office holders like ex-Taoisigh and Presidents.

The Data Protection Commissioner (DPC), on foot of reports by the Irish Examiner and parliamentary questions from Labour’s Alan Kelly, has now said that such payments to barristers by State bodies should be disclosed, even with GDPR in place.

In a letter to the PAC, Deputy Data Commissioner Colum Walsh said the DPC concluded that the interests of barristers to privacy in respect to payments received did not override the public interest as to how State bodies spend their money.

“Barristers could have no expectation that the legal fees expended by the DPC as a public body would not be subject to parliamentary and public scrutiny,” he concluded.

Mr Walsh told the PAC that in his view, the practice of disclosing the names of barristers along with the fees paid to them by government departments and public bodies is a long-standing one.

“I am not clear on what has precipitated the apparently recent change in practice on the part of certain public bodies. The lawful bases for processing fees have not undergone any material amendment as a result of the adoption of GDPR. I understand a number of government departments and public bodies continue to disclose payments made to barristers and other natural persons,” he told the PAC.

The department has relied upon unspecified advice from the Attorney General as the reason for no longer being able to disclose such fees.

However, Mr Kelly said on foot of that the DPC has said the Government should now release the details of the legal fees paid out for the Apple case.

“After months of trying to chase the figures of what payments were made to barristers on behalf of the State on the Apple case, I have continuously been stonewalled by the Department of Finance under the guise of GDPR,” he said. “It is vital that the public is aware how and where their money is being spent.

“The Government’s reasons for withholding this information have been completely dismissed by the Data Protection Commissioner. The best thing Minister Donohoe and his officials can do now is to publish the information.

“This should be a lesson to Fine Gael that they can’t continue to hide behind complicated legislation like GDPR in order to hide how they are spending the public’s money.”

PAC chairman Sean Fleming said it was clear the DPC believes the balance is in favour of public disclosure and accountability. He also welcomed the support from the DPC to his committee’s recommendation that people tendering for such work be made aware their payments will be publicly disclosed.

A spokesperson for the Department of Finance told the Irish Examiner that advice was sought from the Office of the Attorney General on the implications of GDPR on the issuing of information in relation to payments made to individuals.

“Taking account of that advice, the Department considers that it is now constrained from releasing information relating to particular fees paid to individual Counsel. There has been no change in policy. The matter remains under consideration.”