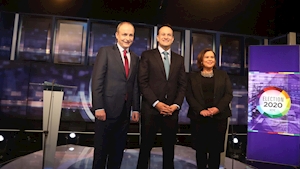 Government formation after the general election looks set to be thrown into chaos as an exit poll tonight predicted that the three big parties are tied.

The shock IPSOS MRBI poll makes it extraordinarily difficult to predict which of the three parties-Fine Gael, Fianna Fail or Sinn Fein, could be in a position to lead the next government.

The exit poll figures released tonight predict that 22.4% of voters backed Fine Gael, while Sinn Fein looks set to get 22.3% and Fianna Fail could get 22.2% support.

The dead heat between the three big parties does reveal that Sinn Fein has managed to get voters out, after the later stages of the campaign showed a surge in support for the party. In previous elections, polls were high for Sinn Fein ahead of voting, but the numbers never materialised at the ballot box.

The results of the poll-carried out by the Irish Times, RTE, TG4 and UCD, were announced at 10pm tonight, just as polling stations closed across the country.

Other figures released for the poll show that the Green Party looks set to receive 7.9% while Labour would get 4.6%. and the Social Democrats 3.4%. Solidarity-People Before Profit look on course to get 2.8% support while Independents, according to the exit poll could get 11.2% and Aontu could get 1.8% from voters.

More detail is also emerging about the age profile of voters who backed the different parties. For those aged 18 to 24 years of age, Fianna Fail got 15.5% of their votes while 31.8% went for Sinn Fein and 13.6% of that same age group backed Fianna Fail. Some 14.4% of that age cohort backed the Greens.

The initial results of the exit poll will mean that much more focus will be given over to the actual election counts and how seats are won or lost, when ballot boxes are opened in the morning

The results of the poll were announced at 10pm tonight, just as polling stations closed across the country.

Exit polls in the 2016 general election predicted results with a high degree of accuracy.

The poll, even before the ballot boxes are opened and counting starts, will trigger conversation and debate tonight about the campaign and why party strategies failed or succeeded.

Turnout tonight was expected to exceed previous levels in some places, compared to 2016.

In Dublin, overall turnout in 2016 was 60% but areas of the city and county had already surpassed that by 9pm tonight.

In Ulster and Connacht, levels were mixed and reached between 50% and 70% generally in areas.

However, voting trends late tonight looked set to be lower compared to 2016 for Leinster generally as well as for Munster.

Some 516 candidates ran in election 2020, for 159 open seats for the 33rd Dail. There will be 160 members but the outgoing Ceann Comhairle Sean O’Fearghail is automatically elected.

The breakdown of figures are as follows:

UK News innomin - March 1, 2021
0
About one,000 folks have gathered outside a Hong Kong court in which forty seven professional-democracy candidates, campaigners and activists billed with conspiracy to...