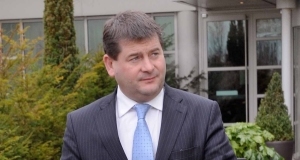 Dara Murphy will be entitled to over €500,000 in taxpayer-funded termination and pension payments following his resignation as a TD.

Under the entitlements afforded to departing members, with eight years’ service, Mr Murphy is in line for termination payments totalling €52,101.

Given he started as a TD in 2011, Mr Murphy is not entitled to draw down on this pension until he turns 65, but it is likely the value of his payments will increase as they are indexed-linked.

Given his three years as a junior minister, Mr Murphy is also entitled to €9,696 a year in a pension, but only when he reaches retirement age.

Payments to outgoing politicians are subject to tax and also the public-service pension levy.

Announcing his resignation, Mr Murphy confirmed his intention to take up a €150,000 a year job in the European Commission.

As revealed by the Irish Examiner last week, Mr Murphy confirmed he will “co-operate with any relevant statutory procedure” into his claiming of expenses, despite being an “absentee” TD, as described by Fianna Fáil leader Micheál Martin.

Yesterday, in light of that controversy, Taoiseach Leo Varadkar and Finance Minister Paschal Donohoe confirmed that a review of Dáil expenses has been initiated.

Despite Mr Varadkar claiming in the Dáil that he could be investigated, it was confirmed that Mr Murphy now cannot be, after he resigned his Dáil seat.

Mr Varadkar said that Mr Murphy would co-operate with the Oireachtas ethics committee or the Standards In Public Office Commission if requested.

However, neither body are now permitted to investigate a complaint made about Mr Murphy as he is no longer a sitting member of the Dáil.

He accused him of “neglecting” his constituents and said should have resigned in 2017.