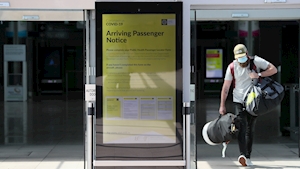 The Government are to introduce Covid19 testing at airports.

Health Minister Stephen Donnelly said the measure was being brought in due to the rise in cases in other countries.

“We’re introducing random testing at the airports and an increased public health presence and we’re examining other options as well for further restrictions on non-essential travel.”

The minister added that “the international situation is becoming more volatile.”

Minister of State for international and road transport and logistics Hildegarde Naughton added that the Government will also be changing the passenger locator form process for people arriving in the state.

The form is currently paper-based form and will move to an electronic model following establishment of a call centre, through the DAA.

“In relation to following up on passengers who are coming into the country, we’re also looking at the potential for pre flight testing and testing for passengers on arrival,” she said.

Ms Naughton said it was “very important to ensure that we have a balance between public health”.

“In order to avoid that we need to ensure that we are adhering to public health advice and also rolling out protocols at our airports.”

Ms Naughton also said that the government was “acutely aware” of the issues facing the aviation industry.

Future of Cork and Shannon Airports

The viability of Cork and Shannon airports is under threat as Aer Lingus carries out a review of its operations which could put hundreds of jobs at risk.

The airline is currently in talks with trade unions about laying off up to 500 staff.

“We’re working very closely with the aviation sector and the Aviation Recovery Task Force who put in a lot of work in relation to support to ensure that we can maintain this kind of activity,” she said.

“We’re coming into a period now where we have to really look at this prolonged recovery phase, and my department is actively working with the aviation sector.

Some airlines have said that the government actions have been detrimental to the sector, and that the widely criticised travel “green list” has limited travel in the already decimated sector.

The junior minister said that the government were working hard to ensure the sector remains viable.

Dad-of-four drove from London to Wales to steal £5,000 of cigarettes as he was...

Ireland innomin - August 5, 2020
0
The new 11pm curfew announced by the government yesterday could put thousands of jobs at risk, according to the Restaurant Association of Ireland...

MoneySavingExpert issues urgent update to those looking to take advantage of the Green Homes...

Dad-of-four drove from London to Wales to steal £5,000 of cigarettes...

MoneySavingExpert issues urgent update to those looking to take advantage of...