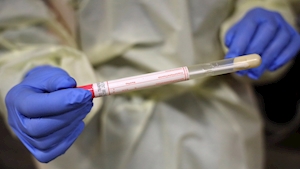 The main Covid-19 test in use by Ireland’s health services remains the “gold standard” for detecting the virus, despite Ireland’s recent history of testing disarray.

The National Public Health Emergency Team (NPHET) made the claim this evening at the daily briefing detailing Ireland’s number of cases and death toll from the coronavirus.

Dr Tony Holohan, the chief medical officer, said that an assessment had been commissioned from the Health Information and Quality Authority (HIQA) in order to “understand the testing landscape”.

Ireland has experienced heightened delays in recent times in terms of testing, most specifically in terms of results being delivered to people who have been swabbed.

“We have identified a range of diagnostic tests that will need to be reviewed before being adopted as part of a national testing programme,” Dr Mairin Ryan, director of health technology assessment with HIQA, said.

“The assessment has confirmed that Ireland’s current test, the real-time RT-PCR, remains the gold standard for detecting and confirming Covid-19 cases,” she added, stating that the turnaround time for a result from the test is six hours.

The briefing heard that a further 49 people have died from the disease, the second-highest total communicated by NPHET to date.

The vast majority of those deaths had occurred over the last five days, Dr Holohan said.

The latest death toll brings the overall number of people who have died in Ireland having contracted the virus to 769. Despite the ongoing high daily death tolls, Dr Holohan said that the five-day average growth rate of deaths in real-time is continuing to fall consistently.

Meanwhile, a further 631 new confirmed cases of Covid-19 were announced, bringing the overall total across the country to 16,671.

Dr Holohan said that of the 769 deaths notified to date, some 412, 53%, related to either long term residential care settings or nursing homes. The figure for nursing homes alone is 348 meanwhile.

“The mortality we know is higher than in the general population simply because of the frightening vulnerabilities of some of the population within those care settings,” she said.

Asked if he feared a second wave of the virus, given that Ireland’s confirmed cases appear to have plateaued, Dr Holohan said that “we didn’t really have a first wave” given the efforts made to suppress the disease.

Despite this, and the increasing anecdotal evidence that the country is beginning to chafe at the lockdown restrictions it is operating under, Dr Holohan said that no decision has as yet been taken regarding the lifting of those restrictions come the next deadline for their review of May 5.

Dr Holohan would not be drawn on whether or not the measures announced today to provide childcare for frontline healthcare workers, which would see the partners of those workers employed in the public sector given paid leave in order to mind their children, are the sole provision that will be made available to the sector.

Those measures were earlier harshly criticised by the Irish Nurses and Midwives Organisation as “doing nothing” for the vast majority of such workers, given most would not fall within such an “old fashioned” concept of family structures.

He did, however, allude to a possible easing of restrictions on childcare come May 5, stating that should that happen “some of those changes may relate to childcare and childcare provision”.

That would be conditional on NPHET having “sufficient assurance that we can pick up new cases in environments where we’re easing restrictions” he added.