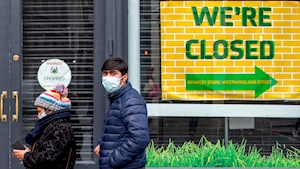 The country will move into the highest level of restrictions under the Government’s five-level plan from midnight on Wednesday for six weeks in a bid to curb the spread of Covid-19.

Taoiseach Micheál Martin has said he foresees a cycle of rolling level Covid-19 restrictions as the country tries to halt the spread of the virus.

Northern Ireland is also under tighter restrictions with schools closed for two weeks and much of the hospitality sector closed for at least four weeks. However, most retail outlets remain open in the North.

Counties Cavan and Meath have the highest infection rates in the Republic.

Derry City and Strabane council area remains one of the worst hit in the UK and Ireland, with a case incidence rate of 1,716.5 per 100,000 people over the last 14 days.

The North’s chief scientific adviser, Prof Ian Young, told BBC Radio Foyle last week that “almost certainly there were one, two, maybe three what we call super-spreader events” in the Derry and Strabane area where somebody who was particularly infectious came in contact with a large number of people.

The latest shows that the infection rate in Dublin for the past two weeks is at 239.1 cases per 100,000 people, below the national rate of 279.3 and lower than 15 other counties.

Within the city itself, infection rates vary. Dublin North West, an area that covers Smithfield, Phibsborough, Finglas and Blanchardstown, has the highest rate currently, with 342.4 cases recorded per 100,000 people over the last fortnight.

Dublin South, which covers Blackrock, Dún Laoghaire, Stillorgan and Shankill, has a rate of 102.9 cases per 100,000.

Speaking in the Dáil on Tuesday, Mr Martin said he recognised that the introduction of Level 5 restrictions would create a “lot of anxiety and difficulties” for workers and would come as a “huge blow” for people, in particular business owners who have been endeavouring to save their livelihoods since the last lockdown.

The countrywide restrictions will come into force from midnight on Wednesday and last until December 1st.