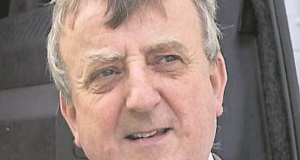 Fears over the spread of Covid-19 prompted a district court judge to tell a court today he that would prefer anyone coughing to withdraw from a packed courtroom.

Judge Patrick Durcan interrupted one of the cases before him today at Gort District Court after he heard a person coughing at the back of the court.

Benches in the large room where sittings of Gort District Court are held twice a month were packed today.

After a number of coughs were heard from the body of the court while a case was going on, Judge Durcan interrupted the case and asked “who is coughing?”

After an elderly woman at the back of the room identified herself as the person coughing, Judge Durcan asked: “Does the lady have business in court? You have a case have you?”

After the woman said she wasn’t there for any particular case, Judge Durcan asked: “Why are you here?”

The woman replied: “I am just attending.”

Judge Durcan then announced: “I would prefer – you are more than welcome to attend. That’s alright.

Shortly after, the woman left the court as Judge Durcan continued to hear cases.

Wales innomin - October 30, 2020
0
A handful of states will play a crucial role in determining the outcome of the 2020 United States presidential election. These...

The key states that could decide the result of the US...