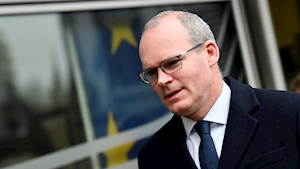 Minister for Foreign Affairs Simon Coveney has said it was “shocking” that the controversial plan by the UK to override key elements of the Brexit deal has passed the first hurdle in the UK parliament.

British prime minister Boris Johnson won initial approval in the House of Commons on Monday night for a plan to breach the Brexit treaty, saying the move was needed because the bloc had refused to take a “revolver off the table” in trade talks.

However, Mr Coveney criticised the latest development in the Brexit process.

“For many people it’s pretty shocking that the British government is voting through its parliament a Bill that breaks international law,” he said.

“I don’t ever remember a time when that’s happened before.

“Let’s wait and see what happens to this Bill because there’s certainly an awful lot of division within Westminster as to whether it’s acceptable of not to do that.”

Mr Johnson won the so-called second reading parliamentary vote on the Internal Market Bill 340 to 263. An amendment was defeated shortly beforehand, though more will follow as he faces a growing rebellion in his party.

The EU says Johnson’s Bill would collapse trade talks and propel the UK towards a messy Brexit while former British leaders have warned that breaking the law is a step too far that undermines the country’s image.

Mr Johnson, though, said it was essential to counter “absurd” threats from Brussels including that London put up trade barriers between Britain and Northern Ireland and impose a food blockade – steps he said threatened the United Kingdom’s unity.

“The EU still have not taken this revolver off the table,” Johnson told parliament before the vote. “What we cannot do now is tolerate a situation where our EU counterparts seriously believe that they have the power to break up our country.”

The DUP’s Jeffrey Donaldson and Sammy Wilson welcomed the Bill but SDLP leader Colum Eastwood and Alliance’s Stephen Farry spoke against it.

“The majority of the people in Northern Ireland voted to Remain. They also supported the wrongly maligned backstop and they now pragmatically recognise the need for the protocol despite its challenges. And to be very clear, the majority of the people and businesses in Northern Ireland do not want this government breaking international law on their behalf,” Mr Farry said. – Additional reporting: Reuters