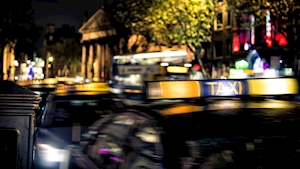 A man who stole cash from a taxi driver’s wallet while the driver was set upon by a group of youths has been given a two-year suspended sentence.

Terence Gavin (27) with an address at Moyne Park, Baldoyle, Dublin pleaded guilty at Dublin Circuit Criminal Court to stealing €320 cash from Imram Shahzad at the same address on August 4, 2016.

The court heard today that Gavin was driven home by Mr Shahzad on the night in question and was asked to pay his fare before he called out to a group of teenage boys in a nearby halting site.

The teenagers set upon Mr Shahzad, punching him in the torso and head. One of them threw a stone through the windscreen of the taxi and shattered it.

While this was happening, Gavin took Mr Shahzad’s wallet and emptied it of €320 before making off. He was later identified from CCTV footage of the pub Mr Shahzad him picked him up from.

The teenagers have never been identified.

Gavin, who works as a flooring contractor, had €5620 in court for Mr Shahzad as a token of remorse and to cover the money stolen and windscreen damage. He has 12 previous convictions, including for theft, road traffic offences and threatening to cause serious harm.

A victim impact statement by Mr Shahzad was handed in to court, but not read out.

Handing down sentence, Judge Martin Nolan said he must sentence Gavin on the charge of theft before the court and not on the assault. “This man was not responsible for the attack and his wrong-doing was stealing,” he said.

He handed down a two-year sentence and suspended it on a number of conditions, including that Gavin pay over the cash to Mr Shahzad.

Patrick Reynolds BL, defending, accepted the theft was “aggravated by the circumstances” and his client made “a very, very bad mistake” on the night in question. He said he had turned his life around in the intervening years since the theft and was now working and supporting two families.

He said Gavin didn’t have a drink or drugs problem, but was drunk on the night in question. “He doesn’t have much memory of what happened,” he said.