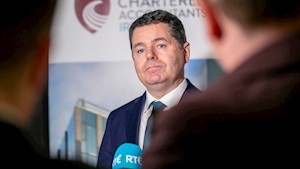 The coronavirus crisis is costing Ireland about €300 million a week, Finance Minister Paschal Donohoe has told the Dáil.

Speaking during the debate on the Emergency Measures in the Public Interest (Covid-19) Bill, he told TDs that this amount could increase or decrease.

“The cost of this intervention to the State will be approximately €300 million per week. That cost is only based on estimates we are creating at a point of huge uncertainty.

“That cost could grow, depending on the challenge we face, or it could diminish if we are successful.

“That acknowledgement of risk and what could change, however, only deepens my view that this is the kind of action a State needs to take at a time of need,” he said.

The plight of those who have lost their jobs were a central theme of his speech, Mr Donohoe sought to give some hope.

He said that although the journey back to economic health could be fraught and filled with economic risks, they would complete that journey.

As part of required social distancing measures, just one third of the Dáil’s 160 TDs are present and sitting two seats apart for the debate.

During exchanges, Mr Donohoe concurred with Independent Tipperary TD Mattie McGrath that in many ways the State and its citizens were involved in a “war”.

But he said that war is about division and about separation, and they wanted to show unity in their efforts, and were striving for a European response that was collective and about solidarity.

Mr Donohoe said it was precisely because of decisions they made in recent years that they could marshal a Government response to the crisis.

At the time of a loss of income, the State should step in and look to guarantee and subsidise a portion of that income.

He said that by acting now the State had the ability, if not guaranteed, to offset the worst of the crisis.

Mr Donohoe added that the State was a vital positive constructive force, the animating concept in people’s lives as citizens.

But it exists within constraints and needs to be able to fund itself, he said.

Over 50 patients on trolleys in University Hospital Limerick

€44k worth of tobacco seized at Cork Airport

Ireland innomin - July 6, 2020
0
The Criminal Assets Bureau has seized several hundred thousand euro worth of assets in Longford this morning.They include a large haul of cash...

Wales innomin - July 6, 2020
0
The Brecon Beacons has re-opened to visitors, meaning you can once again climb Pen y Fan. The park authority announced that...