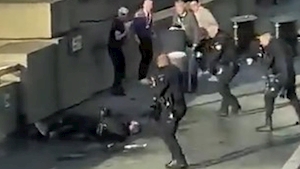 A Co Cork woman caught up in the terror attack on London Bridge has said she feared for her safety when word went around the terrorist might have a bomb strapped to him.

Jane Healy from Knocknaheeney was visiting the English capital with family to celebrate a relatives birthday when their travelling party of 13 found themselves just metres from where convicted terrorist Usman Khan was shot dead by police after he had killed two people.

Ms Healy said she was so close to the incident that people on the bus could hear the dialogue between the terrorist and the people trying to apprehend him. A family member on the bus filmed the incident on their phone.

She added that the experience became very scary when police realised there could be a bomb strapped to Khan’s body. It was only later it was discovered to be a fake.

“We were on the Hop-On, Hop-Off bus tour and we were just coming up by the Fishmonger’s Hall building when it all started. I spotted something going on because there was a bit of hustle and bustle going outside the building as we were taking pictures.

“We were so close we could hear someone of them say ‘police are on the way, he has slit somebody’s throat’.” Then they ran onto London Bridge.

“We saw and heard everything.”

Despite the terrifying ordeal, Ms Helay said she has not been put off travelling to the UK but warned tourists need to “have their wits about them”.

“It was a frightening experience. You’d always hear about these things but you’d never think that you would be in the middle of it.

“We were afraid for our own safety, especially after the police realised he had strapping that looked like a bomb on him. They realised that this was probably more serious than initially thought and they were trying to get everybody back but our bus driver just stopped the bus. He wouldn’t move so we were just stuck on the bridge straight across from where it happened. That’s because there were police coming from every angle and every direction.

“You do have to have your wits about you, that’s the only thing. I’m looking forward to get home, definitely. It would put you on tenterhooks,” Ms Healy added.

– This story first appeared on EchoLive.ie

Ireland innomin - January 27, 2020
0
Both Fianna Fáil and Fine Gael say they are willing to debate with the Sinn Féin leader despite two possible new dates going...

Wales’ largest police force is recruiting new officers – this is how you can...

Wales’ largest police force is recruiting new officers – this is...