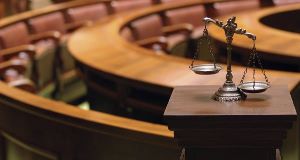 A Cork farmer will not be prosecuted for a second time over the death of a boy who fell from his defective tractor seven years ago, after the Court of Appeal overturned an earlier ruling that the trial could proceed.

Fourteen-year-old Micheál Murphy was killed when he fell out of the passenger door of a tractor being driven by an employee of the appellant, Mr George Ross.

The lock was broken and the door was being kept shut with plastic cable ties when the fatal incident happened on August 23, 2013 at Knocknacullota, Killavullen, Co Cork.

Mr Ross, of Convamore, Ballyhooly, Co Cork, was convicted under the Road Traffic Act and fined €700 by Mallow District Court in October 2014, for allowing the tractor to be driven when it was a danger to the public.

Last year, however, the High Court had ruled that the Health and Safety Authority (HSA) could also proceed with another prosecution against Mr Ross over the 14-year-old’s death.

The 68-year-old today successfully challenged the separate, second prosecution of him by the HSA in the Court of Appeal.

Mr Ross will now not have to come before Cork Circuit Criminal Court under the Safety Health and Welfare at Work Act, on grounds that the tractor was an unsafe place to work. It is an indictable offence, which carries a maximum fine of €3 million and a two-year prison sentence.

Mr Ross successfully claimed that he should not be prosecuted a second time for what he says is substantially the same offence. He also argued that there was a delay in bringing a prosecution and that the two offences being tried sequentially over a period of years amounted to an abuse of process

In her judgement, Ms Justice Aileen Donnelly said that a legal issue arose because of the commencement of the HSA prosecution, despite the fact that Mr Ross had been convicted for a Road Traffic Act offence three years earlier in 2014, relating to the same fatal incident.

Ruling judge Ms Justice Aileen Donnelly criticised the seven-year gap between the death and the ultimate decision on whether the prosecution could occur, which she said “does not reflect well on this State”.

“No family should have to wait that long before a final decision on whether a prosecution arising out of the death of their son can occur,” Ms Justice Donnelly said, before adding that the investigating and prosecuting arms of the State appear to have given “little thought” to the interests of the victim’s family.

The High Court had ruled that, though the two offences arose out of the same set of circumstances, they were not the same offences nor substantially the same and that there was no basis for a prohibition of a second trial as it was not an abuse of process.

However, in her written judgement returned today, Ms Justice Donnelly said she was satisfied that no special circumstances arose in the case which would justify the decision to embark on a process which would have led to sequential prosecutions.

José Mourinho indicates Dele Alli is not content and not battling for Tottenham |...

UK News innomin - January 16, 2021
0
José Mourinho has proposed he has an sad player on his palms in Dele Alli. The Tottenham attacking midfielder, who is the issue...

José Mourinho indicates Dele Alli is not content and not battling...