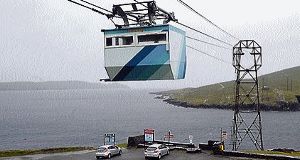 Cork County Council has lodged a number of applications with an Bord Pleanála and the Department of Housing, Planning & Local Government for a €10m project which it hopes will turn the country’s most south-westerly island into a major tourist attraction.

The local authority is seeking to build a new dual cable car system to serve Dursey Island and a tourist/interpretive centre.

Liam Lynch, the council’s project manager, said it has lodged plans with an Bord Pleanála for the new dual cable car system, which will replace the original single cable car opened in 1969.

The plan also involves the creation of a tourist/interpretive centre on the mainland, which will have a cafe and toilet facilities, plus a new car parking areas with 100 spaces.

Mr Lynch said that the council intends to build a toilet block and shelter on the island as part of a cable car terminal and provide broadband.

The council has also lodged an application with an Bord Pleanála for some Compulsory Purchase Orders for land it needs to acquire for the new developments, and has sought a Foreshore Licence from the Department of Housing, Planning & Local Government.

Mr Lynch said it is a joint venture project between the local authority and Fáilte Ireland.

He said the tourism body had already given some money upfront to get the project to its current stage.

“We hope this project will drive an increased economic impetus in the area,” Mr Lynch said.

Mr Lynch said it is hoped the project would lead to more permanent inhabitants on the island. Currently there are just two, although their numbers are swelled with summer visitors who have holiday homes on the island. He added that growth would have to be managed so it will not affect the habitat.