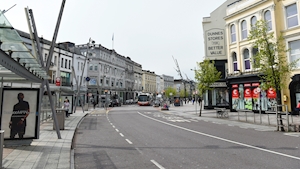 A Cork-based GP has said he would be very surprised if the county is not moved to Level Three of the Living with Covid plan shortly because of the increased number of cases in the county and city.

Dr Ronan Boland warned that there were no grounds for complacency as case numbers had risen rapidly and the capacity of local hospitals had been stretched. He pointed out that on Sunday there were only three intensive care beds available between the two main hospitals in Cork, for a population of half a million.

“The capacity is not there to deal with any surge of normal illness, let alone Covid-19,” he told RTÉ radio’s Today with Claire Byrne show.

Both Cork University Hospital (CUH) and the Mercy Hospital have been operating at full capacity throughout the summer months, he said. In the last two weeks the number of positive cases of the virus had risen from single figures to 54 cases.

Dr Boland said his medical colleagues in Cork were concerned about “an upsurge of small fires breaking out” in the city and surrounding towns, which had happened over the last 10 days.

Each one of those small outbreaks had the capacity to “spread like fire” and to become a bigger problem, he warned.

Dr Boland expressed concern about the behaviour of people congregating in groups, indoors and outdoors as their behaviour was being “disinhibited” with alcohol.

People tended to forget that while they may be relatively safe, they were going home to vulnerable households with uncles, aunt, parents and grandparents who were doing everything they could to stay safe, he said.

His warning comes as the Government monitors the situation closely in counties Cork, Wicklow, Galway and Louth.

A decision is expected by the end of the week on whether these counties will be moved to Level Three.