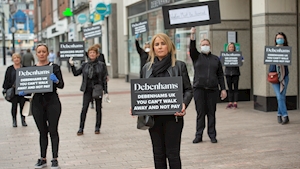 The call comes after protests in Cork and Dingle were broken up in recent days by gardaí.

Members of the force have increased the number of checkpoints across the country and are stopping motorists on their way to work to produce a letter from their employer.

However, they came in for some criticism after breaking up a protest outside Debenhams in Cork on the same day that a number of people gathered to support journalists Gemma O’Doherty and John Waters at a High Court hearing.

“The right to protest, to voice dissent and dissatisfaction without fear of breaking the law, is a core tenet of a democracy,” said the ICCL’s Doireann Ansbro.

“Although the right to protest can be justifiably restricted in a public health crisis for a limited period, the longer the restrictions are in place, the higher the threshold for their justification and the more urgent the need for their review.”

“We’re concerned that recently protesters have been escorted away from protests and prevented from speaking to journalists,” she added.

“While the necessity for restricting some of our rights in the current context is evident, the restrictions must be equally applied, regularly reviewed, and proportionate to the risk.