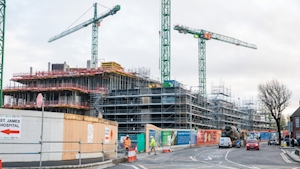 The construction of the new National Children’s Hospital is behind schedule, according to the head of its board.

The €1.7bn facility is due to be completed in 2022 and to be opened the following year.

Fred Barry, the chairman of the National Paediatric Hospital Development Board, has given the Oireachtas health committee an update on the progress so far.

He said he was disappointed at the level of progress to date, but added the project can still be complete in three years’ time.

“We would like if more progress had been made…but we have some very big players working on the construction and they have the capability of recovering that time,” he said.

The National Paediatric Hospital Development Board was appointed in 2013 to design, build and equip the new Children’s Hospital.

Regarding specific consruction work that had been completed to date, Mr Barry said that across the 12-acre site the excavation, piling, and the structural frame to the underground basement for campus wide facilities management, energy centre, and the 1,000-space underground carpark were nearing completion.

He said the “first window has actually been installed in the hospital”, and that more than one million square feet of slabs had been poured.