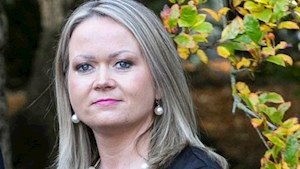 A leading campaigner in the CervicalCheck scandal has quit a key oversight committee in frustration at how a review of women’s smear tests was conducted.

The shock resignation of Lorraine Walsh came on the same day that independent UK body, the Royal College of Obstetricians and Gynaecologists (RCOG), said its review had found that cancer could have been prevented or diagnosed at an earlier stage in the case of 159 of the 1038 women who took part in the review.

Ms Walsh, herself the victim of misread smears, revealed on RTÉ’s Prime Time programme last night that RCOG supplied her with two different sets of results of her own smears over a 24-hour period in October.

An emotional Ms Walsh also said that she and fellow campaigner Vicky Phelan were among three women in the review who received two different letters from RCOG, which the review put down to an administration mix-up with a lab in one case, and language needing to be modified in another.

Stephen Teap, who remains a member of the CervicalCheck Steering Committee from which Ms Walsh has resigned, said he “completely understood” why she had done so.

Mr Teap, who like Ms Walsh is a member of the 221+ patient support group, and whose wife Irene died after two misread smears, said Ms Walsh had done “a massive amount of work over the last year and a half on behalf of the women and families impacted by this debacle” and that she would be “a huge loss to us and to the women of Ireland”.

However, he looked forward to continuing to work with her as part of the 221+ group. Mr Teap gave a lukewarm reaction to the RCOG review, published yesterday, while Ms Walsh said she did not have confidence in it.

She said her own slides and Ms Phelan’s had been mislabelled and she found this inexplicable. Ms Walsh called on the Government to fund an “individual independent assessment for every woman”.

The RCOG review, which took 18 months to complete, found 98 women have died, of whom 12 could potentially have been cured if the CervicalCheck national screening programme had detected abnormalities in their smears.

The review also scrutinised colposcopy management — colposcopy is a simple procedure to examine the cervix — and it found that in 27 cases, management was “suboptimal”.

Taking misread smears and inadequate colposcopy together, “collectively” they were associated with 12 deaths from cervical cancer and “radical treatment” in the case of 114 women, the review found.

The 221+ group issued a statement saying that while the review “provides some closure” for many women, for others “it doesn’t complete the story but gives more information which we hope will help lead them to something better”.

Health Minister Simon Harris’ focus was on the review finding that the CervicalCheck programme is working effectively “and crucially that women can have confidence in the programme”.

Henry Kitchener, the lead assessor in the review, said he has confidence in Ireland’s screening programme despite the findings. However, the failings they had identified in CervicalCheck mean for some women “the consequences were not inconsiderable”.

The review looked at the slides of 1038 women and it disagreed with CervicalCheck results in 308 cases. Of the 308, 58 women are part of the 221+ group, the patients originally identified as having received misread smears.

The 221+ group said its “immediate concern was to provide reliable support to the 250 added women and families who are dealing with the impacts on their lives of a newly confirmed failure in screening”.

Wales innomin - January 25, 2020
0
A man and an eight-year-old girl have died after a house fire in Hull. Emergency services were called to Wensley Avenue...

Ireland innomin - January 25, 2020
0
Mourners gathered at the home of Cameron Blair in Tullymurrihy in Ballinascarthy to pay respects to the student's family today.Cameron will be laid...