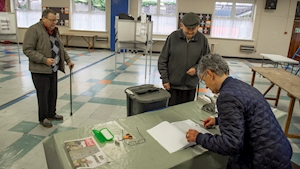 Voter turnout is still slow in the four by-elections being held today.

The percentage of voters was in the mid-teens this afternoon.

Ahead of what is usually an evening rush turnout in the byelections is low this evening as politicians fight with Black Friday and the Late Late Toy Show for the attention of voters this evening.

Most areas have seen turnout in the low to middle teens this evening.

In Wexford, the average turnout was around 15% with a high of 18.8% just outside Gorey

In Cork North Central voting was described as very slow, between 8% and 10% by one estimate.

Things are not much better in Dublin Fingal or Dublin Midwest.

The lowest ever turnout for a byelection was 27.88% in Dublin South Central back in 1999.

There is every chance one or more of these elections could now hold that dubious record by the time voting finishes at 10pm.