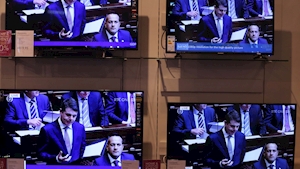 A surplus in the public finances of €1.4bn or 0.4% is now likely at the end of the year because of higher than expected corporation taxes, Finance Minister Paschal Donohoe has said.

This is compared to the 0.2% surplus predicted on Budget day in October. Delivering a keynote address at the Institute of International and European Affairs in Dublin, Mr Donohoe said this surplus is virtually double what was expected two months ago.

“Taxes paid by the corporate sector in November — the single most important month — were €0.7bn ahead of expectations,” he said. “In the year as a whole, overall tax receipts are likely to be €600m higher than we thought in October.

“On foot of today’s figures, I now believe a surplus of 0.4% of GDP is in prospect for this year. In cash terms, this represents a surplus of around €1.4bn.”

Mr Donohoe said it is by running surpluses that Ireland can reduce its vulnerability to a reduction in corporate tax receipts.

“As I’ve said previously, receipts at this level will not last forever,” he said. “A further increase for next year is likely but, subsequently, I expect these receipts to begin to fall. Building up our surplus is the best way of addressing the decline in corporate tax revenue that looks increasingly inevitable.

Mr Donohoe said he realises that changes are needed to the international system of corporation tax, which is 100 years old. He said he has always supported the Organisation for Economic Co-operation and Development (OECD) as the most effective organisation through which these challenges can be addressed.

“I have consistently argued that tax competition is a legitimate form of competition between countries looking to attract investment to their shores,” he said. “This is especially the case for geographically disadvantaged countries, such as Ireland. I will continue to argue that point within the OECD framework.”

Mr Donohoe said recent improvements in living standards have been achieved without a credit boom. Last year, Ireland had an underlying current account surplus of €13bn — 6.5% of national income.

“This means we are very much paying our way in the world.”

While many people are still experiencing difficulties, the economy is now in much better shape, he said.

“Having said that, I am acutely aware that economic recovery has not been uniform,” said Mr Donohoe. “Crisis legacies remain, not least in the form of an inadequate supply of housing and healthcare, as well as rental and childcare costs.”

On Brexit, he said, there is no good UK exit for Ireland, and anything that disrupts free and easy trade between Ireland and the UK is bad for Irish business, bad for our economy and bad for our common bonds.