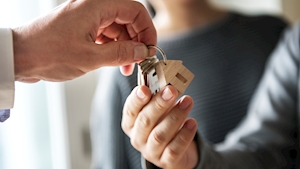 Two brothers, one of whom tragically since became blind, have lost the €650,000 home they bought together in 2009 after debt on their joint mortgage spiralled to just under €1m.

Judge Jacqueline Linnane, granting so-called vulture fund Promontoria (Oyster) Dac a possession order against David and Mark Darcy, said they had made only two payments totalling €1,600 in the 10 years since they had bought the property.

The judge told barrister Eoghan Keane, counsel for Promontoria, that she would award legal costs against both brothers after he had stressed the need for a costs order following a highly contested application by the fund to recover the property.

Mr Keane, who appeared with Dylan Byrne of HJ Ward Solicitors, said the brothers had opposed Promontoria’s application for a possession order since the case had come to court almost four years ago.

Judge Linnane said the brothers now owed €991,000 on their mortgage, including €351,479 of arrears on repayments, and stated that they had effectively lived rent free in the property since 2009.

The court heard that David’s wife Joy, mother of their two young children, had been made a co-defendant in the case but the costs order was not applied to her. Peter and Joy and their two children will be able to spend Christmas in their home.

Judge Linnane granted the couple, and Mark Darcy, a stay on her order until 1st March 2020 to allow the couple time to put their affairs in order and acquire alternative accommodation. Roisin Burnside, counsel for the brothers, said Mark had in recent years become blind and was now living with his parents.

She said David Darcy, who was still living with his family in the property, had become unemployed following the financial collapse in 2009 but had been working for the past year. She said he had twice asked Promontoria to accept settlement agreements but these had been refused.

Solicitor Peter Connolly, who appeared only in today’s proceedings for Joy Darcy, was refused an adjournment to read himself into the case and make further applications on her behalf.

Ms Burnside, who appeared with FH O’Reilly solicitors, said David Darcy had found himself in a quagmire of debt and asked the court to allow him remain in his home while recent personal insolvency considerations were progressed.

When Judge Linnane granted the possession order Ms Burnside said her client was in penury and asked the court not to make a punitive costs order against him.

Judge Linnane said the defendants had added to costs by contesting the application, as they were entitled to do, but while not making a single repayment since 2011.

Wales innomin - April 2, 2020
0
Working in retail at any time can be a tough job - doing it during the coronavirus outbreak could be...

The young shopworker who’s buying groceries for his elderly neighbours from...

Over 1,000 nurses have joined the Nursing and Midwifery Register to...