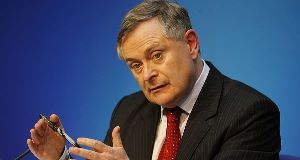 The Labour Party leader says he will not consider any coalition options that include Sinn Féin.

Brendan Howlin says he believes the IRA still has influence over the Sinn Féin leadership.

He says while he believes in many of the party’s objectives – he thinks the IRA still has too much sway over Sinn Féin policy.

The comments come less than 24 hours after he refused to rule out the possibility.

“We are in sympathy with a lot of what they want to achieve,” he conceded.

“My problem with Sinn Féin as a party of government is who runs Sinn Féin?

“I’m not confident that the leadership of Sinn Féin is actually what we see,” he said.