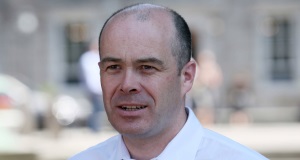 Credit unions should not be charged for the cost of Central Bank oversight the same way commercial banks are, independent TD Denis Naughten has said.

Deputy Naughten (pictured) is tabling an amendment to the Finance Bill on the issue, seeking a freeze on the introduction of an increased Central Bank levy on the country’s 240 credit unions.

However, Deputy Naughten said the costs of Credit Union regulation should be paid for by the main banks.

“I want the banks to pay the share the credit unions are being forced to pay. The reality is that in many parts of the country the banks have abandoned rural communities (and) the only financial institution that is left now is the credit union.

“But also the credit union is providing cash to many people – particularly coming up the Chritsmas – that the banks just don’t want as customers.”

He added: “Credit unions are not the same as banks and they should not be treated the same. The reality is that many of the customers that use credit unions are not wanted by the big banks. If they cannot get access to loans for times of the year like Christmas then they will be forced into the hands of loan sharks and that is in nobody’s interest.”

UK News innomin - December 4, 2020
0
The billionaire manager of Glencore is to move down from the commodity investing company following calendar year, in a shift absent from the...

Ireland innomin - December 4, 2020
0
A further six deaths and an additional 265 cases of Covid-19 have been confirmed this evening by the Department of Health. There has now...

Ireland innomin - December 4, 2020
0
Performers, including dancers, actors and singers gathered outside Leinster House yesterday to protest against the ongoing closure of the performing arts sector due...

Glencore’s main Ivan Glasenberg to move down from investing company |...