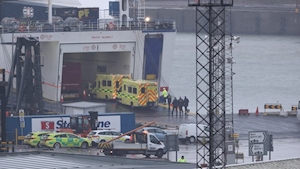 Ireland will see more cases of people risking their lives to come here unless the Government commits to solutions that allow people to safely and legally escape persecution.

That is according to the Irish Refugee Council following the discovery of 16 people in a sealed container on a truck owned by an Irish company on a ferry bound for Rosslare Europort in Wexford.

The incident comes one month after 39 people were found dead inside a container in Essex which had arrived in the UK via a ferry from Zeebrugge, Belgium.

Earlier this month, an Irish truck driver working with a Cork-based firm was released without charge in England after he was questioned about the discovery of 15 people in his lorry.

In this latest incident, the captain of the Stena Line ferry informed gardaí at around 9.45am yesterday that a number of people had been discovered in the trailer of an articulated tractor unit on the vehicle deck.

Stena Line said an employee discovered the people during a routine inspection, reportedly after banging was heard on the side of the trailer. The 16 people, all men aged between 20 and 40, were moved to a private passenger lounge on the ship before the ferry docked in Rosslare at 2.40pm. They are understood to be from Iraq.

The ship was met by gardaí and emergency services upon its arrival. All 16 men were medically assessed and were found to be in general good health. They will be processed under immigration legislation, gardaí confirmed.

The truck involved in this incident has since been removed to a secure location for further examination.

The driver, a man in his 50s who has been a resident of Ireland for 25 years, and the owners of the vehicle are fully assisting gardaí with their inquiries.

Nick Henderson, chief executive of the Irish Refugee Council, said that unless the Government commits to solutions to helping people escape persecution, people will continue to risk their lives in this fashion.

“Without more proactive responses and solutions which open up safe and legal ways for people to escape persecution we will continue to see people making journeys of this nature,” said Mr Henderson.

“There is no visa to claim asylum. A person cannot go to an embassy in their country and ask for protection. They have to be in the country to make the asylum application.

“Data from the Department of Justice, available up until the end of 2017 but not for subsequent years, indicated that the vast majority of asylum applications were made at Dublin airport, not at seaports. It is likely that this remains the case.”