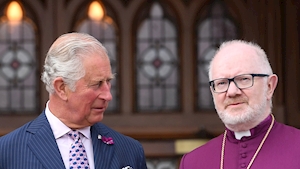 Archbishop of Armagh Dr Richard Clarke will step down from the role on February 2, 2020.

The Church of Ireland Archbishop of Armagh has announced his intention to retire.

Dr Richard Clarke will step down from the role on February 2, 2020, he told an audience in Armagh on Saturday.

The 70-year-old, who is originally from Dublin, has served as archbishop since 2012.

Archbishop Clarke made the announcement during his presidential address to the Armagh Diocesan Synod in the Crozier Hall, at St Mark’s Parish Church, Armagh.

“When I became Archbishop of Armagh at the close of 2012, I made a quiet agreement with my family, a few close friends, and myself that I would try to work on as Primate for five years, assuming of course that ill-health or mortality itself did not intervene,” he said.

“Coming towards the end of that five-year period, I would then review the situation with my family and, if all seemed to be working out reasonably well and I felt that I was still ‘up for it’, I would continue on for a further two years, but would not go on beyond that point. This latter moment in time has now arrived.”

Archbishop Clarke will carry out his duties until February 2, 2020 after which the Church of Ireland House of Bishops will consider the selection of a successor.

Diarmuid Martin said Dr. Richard Clarke’s had done this in a variety of contexts within Ireland and abroad.

Archbishop Martin said he engaged in a very ‘hands on’ way with church life and community life at the same time and has also served the wider Anglican Communion with diligence.