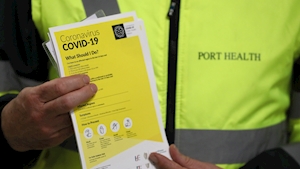 Members of the public should call out Covid-19 cheats and inform gardaí about people breaching lockdown restrictions introduced to combat the virus.

Garda commissioner Drew Harris made the plea amid growing fears of public complacency over the restrictions over the Easter weekend.

“If people see something that is of concern to them, which they think is something where there is a risk of the illness being spread on, a further vector for the illness, then they should let us know so that we can act, arrive there, deal with the situation, and hopefully then resolve it,” he said.

Gardaí have been granted new powers to arrest and prosecute anyone breaching the restrictions on movement, as another 25 deaths from the virus were confirmed yesterday.

The total number of deaths now stands at 235, with a further 365 confirmed cases bringing the total across the country to 6,074.

Ahead of what promises to be a sunny bank holiday weekend, gardaí are policing Operation Fanacht, with people warned that anyone found in breach of travel regulations will be asked to turn around and go home.

Mr Harris said gardaí would use new powers in a graduated, proportional way, and that if people are stopped by gardaí and found to be in breach of the regulations, they would not be arrested immediately.

“There is no on-the-spot fines. The first port of call would not be arrest.”

A Garda spokesperson confirmed that arrest would only be used if appropriate, and as a last resort.

Mr Harris said anyone already in a holiday home now has to stay there, and otherwise people have to stay at home.

“If you are thinking of travelling there, then don’t. That is not an essential journey. So if you have travelled to your holiday home, that is where you are now.

“That is your place of residence, and that will be regarded as where you should be. I want to reiterate, a journey to a holiday home is not an essential journey and we will be able to turn you back.”

Meanwhile, refrigerated containers have been installed on the grounds of Cork University Hospital (CUH) to store the bodies of coronavirus victims.

The Irish Examiner has learned that two large containers will be kitted out with racks over the coming days to allow them store at least 40 bodies each.

The units have been installed on a site to the rear of the CUH campus as part of the hospital’s extensive Covid-19 crisis preparations. Other hospitals are planning similar measures.

While the city has contingency plans in place to store bodies at a temporary morgue on the grounds of Collins Barracks, it is understood that the units have been installed on the grounds of CUH to provide capacity for hospital deaths.

The State’s chief medical officer, Dr Tony Holohan, has said the system of contact tracing for Covid-19 “is under strain” as a result of the exponential growth in nursing home outbreaks.

Elsewhere, the Government also announced a €1bn package of supports to help firms at risk of going to the wall as a result of the pandemic.

The measures include Government loans at reduced interest costs, and vouchers for small firms to get online.

History that really matters in Tiger Bay, where nations lived as one | Carolyn...

Wales innomin - June 6, 2020
0
“Tiger Bay is gone,” wrote the author of the piece, Tim Justin Robinson. “The name remains, the legends will persist, the stories...

History that really matters in Tiger Bay, where nations lived as...