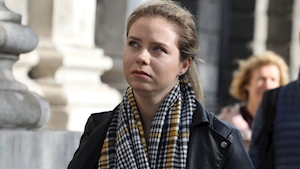 The woman at the centre of the swine flu vaccine case, Aoife Bennett, has told of her shock at the “adversarial” nature of the court case which lasted 21 days.

The State is facing legal and other costs estimated at up to €4m following the settlement yesterday of the case taken by Ms Bennett who claimed she developed narcolepsy after being administered with a swine flu vaccine.

Ms Bennett, from Naas, Co Kildare, took a case against the Minister for Health, the HSE, and GlaxoSmithKline Biologicals, as well as the Health Products Regulatory Authority.

The settlement, the details of which remain confidential, is without an admission of liability.

She told RTÉ radio’s Today with Sean O’Rourke show that it had been very tough watching her parents being cross-examined before she gave her evidence.

“We weren’t expecting the level of cross-examination, our legal team thought they would take it easy on me, but that wasn’t the case, it was very adversarial.”

She said she had been shocked when her mother was questioned, but because of her condition had been drowsy when her father was in the witness box. Having her parents go first did prepare her in a way, she said.

“But it was tougher watching them being questioned. I wanted to stand up to add in, to help.”

Ms Bennett said she was satisfied with the outcome as she had not known what to expect. “I just wanted enough support to live my life.”

She added that she hoped other families will not have to go through what she did in court. “It was very draining, I had to put my life on hold. No-fault compensation would be a good thing.

“I don’t know why the Minister for Health has let it go on so long or why the Department of Health let it go to the courts.”

Pack of dogs kill more than 700 giant rats in one day after farm...

Wales innomin - January 21, 2020
0
These shocking pictures show a savage pack of dogs catching and killing more than 700 huge rats in one day after...