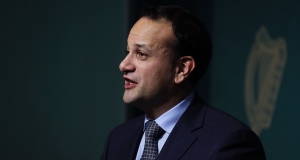 Today will be “another difficult day” for women who have been impacted by the CervicalCheck scandal, the Taoiseach has told the Dáil.

The Royal College of Obstetricians and Gynaecologists (RCOG) review of smear test slides has found that the opportunity to prevent or diagnose cancer earlier was missed in 159 cases.

However, speaking in the Dáil, Leo Varadkar said he hopes the publication of the report will be “another step” in restoring confidence in the CervicalCheck programme, which he said “we all know has saved many lives, detected cancer early and prevented many hysterectomies and more radical surgeries as a result of that.”

Mr Varadkar told the Dáil that when the controversy first came to light two years ago “I did not handle it in the way I should have” and the Government “made some mistakes”.

However, he said it is “encouraging” that the individual women involved in the RCOG review got the information, either by letter or in a meeting if they preferred, long before the report came to Cabinet this morning or was published.

“It is a significant improvement on two years ago that those affected were informed before the report came to the Cabinet or this House or entered the public domain,” said Mr Varadkar.

Fianna Fáil leader Micheál Martin raised the case of Bernadette Kiely from Cork, who is one of the women impacted.

Mr Martin told the Dáil that Ms Kiely was never informed of the fact she was part of the audit and a 2017 letter from then clinical director of CervicalCheck Grainne Flannelly was not disclosed to her.

“What is quite extraordinary is that it was only in November that Bernadette Kiely discovered she was part of the original audit by CervicalCheck.

“If it was not for her solicitor who sought access to her medical records in October just past that fact would never have come to light.”

Mr Martin asked: “How many more Bernadettes are out there that we do not know about?

“It is extraordinary, given all of the controversy surrounding this issue for the past two years, there are still stories like Benadette Kiely surfacing and emerging,” he said.

Wales innomin - January 28, 2020
0
The alleged Glynneath murder victim has been named as 73-year-old David Williams. Mr Williams' body was found in the Danygraig...

UK News innomin - January 28, 2020
0
A transfer to ban moms and dads from smacking small children has been accepted by the Welsh assembly and is anticipated to arrive...

Wales to ban moms and dads smacking their small children from...