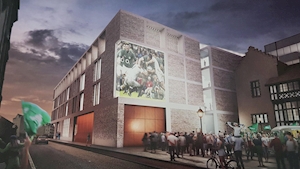 The heritage group An Taisce says it’s still examining the decision to grant planning permission for the €80m Cork event centre ahead of next week’s deadline for possible appeals.

It is understood the charity, which has previously expressed concerns about the decision to locate the proposed 6,000-capacity venue on the former Beamish and Crawford site, and which has expressed concerns about its design and impact on views in the heart of the Medieval city, is carefully considering its position arising out of Cork City Council’s decision to grant planning for the project, with 48 conditions, on October 10 last.

Any possible appeal of a planning decision or of the conditions must be made to An Bórd Pleanála within four weeks of the local authority’s decision. It is also open to an applicant to appeal the conditions attached.

The deadline for appeals on the event centre decision expires at the end of next week.

A spokesman for An Taisce declined to comment on whether it is considering an appeal in this case.

“We are certainly examining the decision and we are looking at design and traffic implications,” he said.

The controversial Cork event centre project, proposed by developers BAM and to be operated by Live Nation, is set to benefit from at least €30m in state funding with more public money earmarked for infrastructural improvements in surrounding streets.

But the entire project has been dogged by design and planning delays, and mired in political controversy over the state-funding package since its sod turning by former Taoiseach Enda Kenny ahead of the 2016 general election.

As the venue was redesigned and enlarged, the request for public funding also increased, creating many legal complexities which stalled the entire venture.

Hopes that the saga was entering the final stages were raised in September when the government announced ‘funding certainty’ in relation to the state-funding package.

While there is still no clarity on the final figures, Taoiseach Leo Varadkar said the state will provide the “necessary funding within spending ceilings” to allow Cork City Council enter final contract negotiations later this year with BAM and Live Nation.

The decision a few weeks later to grant planning for the redesigned venue was seen as a major step forward in the tortuous process.

It is understood that while final detailed costings have been agreed, a formal legal process will be required to sign off on the costs and to allow the delivery of the complex state funding package.

Pending a planning appeal, it’s hoped those final contract talks will get underway within weeks, and could even conclude before the end of the year.

Hopes have been expressed that if the process reaches a successful conclusion, builders could be on site by next summer.