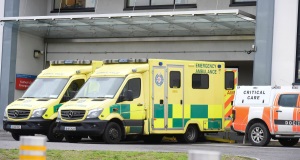 Ambulance crews are being “obstructed” from doing their job at Cork University Hospital because of the overcrowding crisis in the emergency department (ED), according to SIPTU.

The union’s health organiser, Paul Bell said crews were being “held up for hours” as they waited for patients brought in on stretchers to be admitted.

“Patients brought in on stretchers are caught in no-man’s land until such time as ambulance crews can hand them over to ED staff,” he said.

However, this handover was “taking hours” because of ED overcrowding.

The crews also had to wait until they could reclaim the stretcher and return it to the ambulance.

“Our members are deeply concerned in the CUH and beyond that the overcrowding crisis is now obstructing them from doing their jobs effectively.

“We have an unacceptable situation where ambulance professionals and very expensive equipment is being held up for hours while other patients need immediate care. This is not sustainable.

“We need an immediate contingency plan to deal with this. As we enter the winter period this problem is only more likely to get worse and we need action now,” Mr Bell said.

He said while all emergency calls were being responded to, “response times go out the window”.

Mr Bell said a new protocol was needed, similar to the UK, where patients can be cared for in a “reception suite” while awaiting handover to the ED.

This freed up ambulance crews to respond to fresh calls, instead of delaying them for hours.