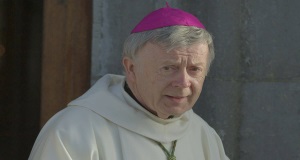 Sensitive situations concerning vulnerable people are being exploited by those “who trade in hatred and fear,” the Archbishop of Tuam has warned.

Archbishop Michael Neary made his comments following a wave of protests objecting to plans to house 13 female asylum-seekers temporarily at the Head Hotel in Keel in Achill.

Last Thursday, the Department of Justice announced it postponed the group’s move to the area as it would not be in their best interests while awaiting decisions on their protection applications.

“It is well known, nationally and internationally, that Achill people are a welcoming people and, in the past, Achill has accepted people from communities from around the world,” the Archbishop said.

“As Christians we are morally obliged to welcome the stranger and, in the context of our improved circumstances, we have a responsibility to share with those who are less fortunate than ourselves.”

“We should also be particularly alert to those who are experiencing serious upheaval and a crisis of hope in their lives.”

Neither Archbishop Neary nor the local church were consulted on any plans by the Department of Justice, he added. “In relation to Achill, it is important that effective advance planning be undertaken by the State including a full and transparent consultation with local people.”

This should “go some way to allay fears and misunderstandings”.

A spokesperson for the group of protesters refuted the claim that its “silent vigil” held at the Head Hotel was “intimidating in any shape or form”.

The Movement of Asylum Seekers in Ireland (MASI) has since confirmed it has not been contacted by any of the groups objecting to plans to house asylum-seekers in their area.

Meanwhile, a group of Ballinamore residents who are set to launch a welcoming committee in the Co. Leitrim town this week say they want an “alternative voice” to be heard on the issue of asylum seekers.

The group has already met with campaigners from Ballaghaderreen, Co. Roscommon, who welcomed over 200 Syrian refugees in 2017, seeking advice on how to support asylum seekers.

It is inviting locals to a public meeting in the town on Tuesday. Local resident Caroline Dempsey said she stepped forward after local TD Martin Kenny’s car was set alight in an apparent arson attack outside his home.

“I think that was a catalyst and I just wanted to show that there is an alternative voice in Ballinamore and it is becoming more mainstream.”

Ireland innomin - January 23, 2020
0
Two families lives were changed irreparably by the abduction and killing of Jastine Valdez, an inquest into her killer’s death heard this evening....