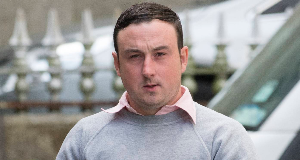 Aaron Brady has been found guilty of involvement in the robbery that led to Detective Garda Adrian Donohoe being shot dead.

The jury of five men and seven women will continue their deliberations tomorrow on the charge of capital murder which Mr Brady has denied.

At 13.33 on Monday after 12 hours and 35 minutes considering their verdict since last Wednesday, the foreman of the jury announced that they had reached a unanimous verdict that Mr Brady is guilty of robbery. Mr Justice Michael White asked the jury to return to the Central Criminal Court tomorrow and said he will accept a majority verdict in relation to the capital murder charge if at least 10 of them agree.

Mr Brady (29) of New Road, Crossmaglen, Co Armagh had denied involvement in the robbery of €7,000 at Lordship Credit Union in Bellurgan, Co Louth on January 25th, 2013. He has also pleaded not guilty to the capital murder of Det Gda Donohoe at the same location during the course of the robbery.

During the trial the jury heard that four men jumped over a wall surrounding the credit union car park as employees prepared to leave with the day’s takings from several rural credit unions.

The prosecution has alleged that Mr Brady was the gunman who fired a single shot that fatally wounded the detective. Mr Brady told the trial that he was at a diesel laundering yard on Concession Road in south Armagh when the robbery took place.

Mr Justice White has previously told the trial that there are several possible verdicts in relation to the capital murder charge. If they are satisfied that the prosecution has proven beyond reasonable doubt that Mr Brady was the gunman, for capital murder it must also be proven that he knew he was shooting a member of An Garda Siochana acting in accordance with his duty or was reckless as to whether it was a garda. If they accept that he was the shooter but are not satisfied that capital murder is proven they can find him guilty of murder or guilty of manslaughter. Manslaughter, the judge said, is an unlawful killing where the accused person did not intend to kill or cause serious injury. The defence raised the possibility of manslaughter on the grounds that the shooter may have been attempting to fire a warning shot.

Anneliese Dodds to accuse Tories of ‘file of failure’ in excess of careers |...

UK News innomin - September 20, 2020
0
The shadow chancellor, Anneliese Dodds, will accuse the Conservatives of wasting billions of lbs . of community dollars through botched outsourcing and poorly-built...

‘Our foster child asked us to adopt him – by drawing himself on to...

Scotland innomin - September 20, 2020
0
By Sarah McDermottBBC NewsGeorge is one of tens of thousands of children in the UK who've been taken into care because their parents...

Wales innomin - September 20, 2020
0
A new hotel by Swansea's indoor arena is likely to be eight storeys, but has been shifted after concerns from...

Anneliese Dodds to accuse Tories of ‘file of failure’ in excess...

‘Our foster child asked us to adopt him – by drawing...

New hotel in Swansea city centre is likely to be eight...