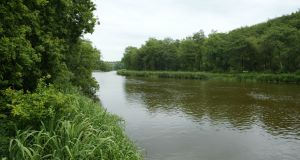 A dog, two women and a man are being hailed as heroes after rescuing an elderly man from the River Barrow in Carlow.

The man, who is understood to be in his 70s, was walking along the Barrow Track in Carlow Town, when it is understood he suffered a stroke, which caused him to collapse and fall into the river.

Local man, Cillian Coakley had just passed him while walking his dogs and he was the first to jump into the river after him when one of his dogs alerted him to what had happened.

It was Mr Coakley’s shouts that then got the attention of joggers, Gillian Hegarty and Sharon Buggy, who were on their lunch break from Seery’s Bakery in Graiguecullen.

Speaking on local radio, KCLR FM Ms Buggy said: “When we came down (to where the man fell in), we jumped in as well. I pulled him up from the shoulders, and Gillian and Cillian pushed him up because it was kind of up a bank.

“He was unresponsive for a while… We were waiting for about 15 minutes or more for the ambulance because they couldn’t really get out to us or find us, even though we could hear the sirens. Eventually he did come right.”

Ms Buggy added some of the credit has to go to one of Cillian’s dogs, who was the first to notice something was wrong.

“He was just walking the dog and he literally had just passed [the man] and said hello, and his dog stopped, just suddenly stopped in his tracks and looked behind because he probably sensed something.

“Cillian said he didn’t even hear him falling into the water, he didn’t hear a splash or anything. It was the dog that noticed, which is amazing really”.

It is understood that the man is recovering in hospital following his ordeal.

Wales innomin - September 25, 2020
0
The first trials using a cinema to host a jury is set to begin next week as courts try to clear...

Tiny Chinese teapot destined for a charity shop after spending decades in a garage...

Wales innomin - September 25, 2020
0
A homeowner was gobsmacked after his teapot which was destined for a charity shop after spending decades in a loft turned...

UK News innomin - September 25, 2020
0
Very last calendar year, businesswoman Emily Bendell was on the lookout for a private members’ club where she could meet up with people...