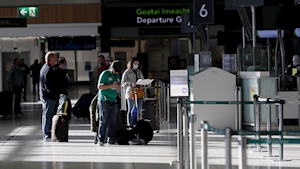 There was a 59 per cent increase in the number of overseas visitors to Ireland in August compared to July.

362,600 people travelled here, according to new figures from the Central Statistics Office (CSO).

That compares to 227,300 people the previous month.

There was also a 20 per cent increase in the numbers of passengers departing Ireland in August.

However, the CSO says the figures are a small fraction of the numbers that travelled in the same month last year.

In 2019, two million people arrived and departed in August.

“The Air and Sea Travel Statistics for August 2020 show a very substantial increase in overseas travel compared to the preceding month. In August, 362,600 overseas passengers arrived in Ireland, compared to 227,300 in July, an increase of 59.5 per cent.

Mr Patrick also spoke more specifically about the areas people traveled from coming to Ireland. He said apart from Great Britain (which accounts for almost all cross-channel routes), the most important routing countries for arrivals in August 2020 were Spain (33,600), Poland (31,700) and Italy (27,300).

“When we look at the year-to-date picture (January-August 2020), the statistics show 3.8 million overseas passengers travelled to and from Ireland.

“This compares to almost 14 million overseas passengers in the same period on 2019, a decrease of almost 73 per cent. This illustrates the continuing and dramatic impact of the Covid-19 pandemic on international travel to and from Ireland,” he said.

Some residents weren’t warned of worst flooding for 40 years because staff were under...

Wales innomin - October 22, 2020
0
Met Office forecast for ThursdayStarting with the weather and it is going to be sunny later today, with patchy frost tonight. Here is...

Some residents weren’t warned of worst flooding for 40 years because...